Here, James Sandbach, Research Manager for the Low Commission reflects on the impact advice services can have on our wellbeing and health.

The VCSE (Voluntary, Community, Social Enterprise) review on partnerships for health and wellbeing has been the latest in a number of strategic studies looking at how bringing in a wider range of community based services into the health system can contribute to improving health, wellbeing and care outcomes.

The recent Kings Fund report on “Supporting integration through new roles and working across boundaries” is also an important piece of work highlighting some of the issues about the interface between non-clinical support workers and health professionals within the health system. As new care models emerge outlining different strategies to provide the right services by the right teams at the right time targeting individual needs and delivering place-based population health systems, searching questions are being asked about what sort of partners should commissioners and provider bodies be working with to deliver social value and reduce health inequalities.

An important sector that tends to get overlooked in this debate is the contribution of the advice sector, ie organisations providing free welfare, money/debt and legal advice, information and assistance. Evidence for example of the value of placing a local Citizens Advice service outreach within GP surgeries has long been amassing for several decades.[1] However it is only in the past couple of years, especially as ideas around social prescribing have taken root, that there has been any discernable interest in looking more systematically about how advice services can add value or support improved health and wellbeing outcomes in health settings and contexts. Last year the Low Commission

– an independent Commission on the future of the advice sector – undertook an extensive evidence review on the relationship between advice and health outcomes, and models of good practice in collaboration and service delivery. It found that:

“The effects of welfare advice on patient health are significant and include: lower stress and anxiety, better sleeping patterns, more effective use of medication, smoking cessation, and improved diet and physical activity.”

The review looked at provision of welfare advice provision in primary health settings, mental health services and also in secondary and tertiary care settings for example in supporting the discharge planning process and rehabilitation. Evidence of the value of advice based interventions were particularly strong in the mental health context, perhaps unsurprisingly given the amount of empirical data collected in recent years focussing on the relationship between indebtedness and poor mental health, and also in areas like homelessness prevention, income maximisation, community support and reduced in-stays and repeat appointments. Of course as you might expect the evidence base is somewhat varied, with much of it in the “grey literature” territory, but also some more robust data emerging from advice services capturing specifically capturing health outcomes generally gathered from before and after follow up assessments with clients, most commonly using the Warwick–Edinburgh Mental Wellbeing Scale (WEMWBS).

Critically from a policy perspective the research found considerable variation across commissioners in their approach to engaging the advice sector or requirements when commissioning services; at one end of the spectrum there are examples of commissioning partners making considerable investments in advice services to address deprivation and health inequalities and at the other end of the spectrum advice service providers are struggling to engage key commissioners, and services are being decommissioned due to financial pressures. I’ll leave it to readers to study the report and decide for themselves about whether welfare advice in health settings is a good example of “what works in wellbeing,” but it is worth repeating Michael Marmot’s clarion call from the report’s foreword “to broaden our thinking in the future if we are really to put patients and their whole experience and needs at the heart of everything we do.”

There has been an increasing interest in wellbeing among alcohol policy researchers. Recent studies have estimated wellbeing-related impacts such as ‘harms to others’, while the world-leading Sheffield Alcohol Policy Model estimates a 50p minimum price would lead to wellbeing benefits worth more than £2bn over 10 years.

Yet strangely these studies have ignored the main reason that people drink – the pleasure of drinking. Conversely, those few studies that have estimated the value of the pleasure of drinking have made wildly optimistic assumptions about its wellbeing-enhancing effects, which ignore the impaired rationality of people when drinking – something that most of us drinkers can vouch for – or its addictive nature.

To try to spur a more careful consideration of alcohol and wellbeing, George MacKerron and I recently published a paper in Social Science and Medicine that looks empirically at how people’s wellbeing changes as their drinking changes over time. We used two different datasets:

We found that drinking does seem to make you happier. People report being happier at moments that they’re drinking compared to other moments (controlling for what else they’re doing, who they’re with, and what time of day it is). And while it’s impossible to completely rule out reverse causality – that people drink more when they’re happier – we did control for people’s happiness earlier that day, and still found that people were happier when they’re drinking. Yet at the same time, this happiness doesn’t spill over much to other moments (in Mappiness), nor do people say they are more satisfied with life in years that they drink more (in BCS70). Indeed, if people develop alcohol problems then they become (unsurprisingly) less satisfied with life.

What does all this mean for wellbeing-focused policymakers and researchers?

The first point is that this is an area that could desperately use more research. We would assume that different patterns of drinking are associated with different wellbeing impacts for different people – but sadly the only alcohol-related information that Mappiness includes is whether or not people were drinking (and this only for the relatively advantaged groups with iPhones in 2010-2013). A more alcohol-focussed app-based project would undoubtedly uncover more complex patterns of practical significance.

Still, our research already suggests that the wellbeing impacts of alcohol are subtle – they are not simply positive or negative, but rather depend on the time frame and wellbeing measures that you are interested in. And if they also depend on other factors (such as patterns of drinking or cultural associations), then this opens up the possibility of subtle policymaking that particularly reduces the drinks that are least beneficial (or even harmful) to wellbeing. For example, policies could ‘nudge’ intoxicated people into better decisions through smaller serving sizes or regulations on the pub/bar environment. 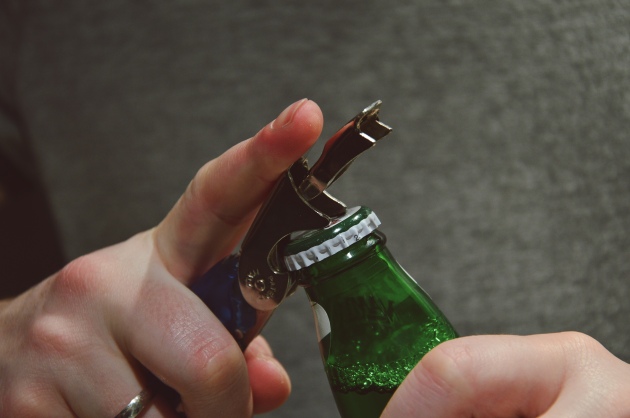 Rather than being the final word, we hope our study prompts other researchers and policymakers to think further about alcohol policy and wellbeing, rather than falling back to the two untenable positions that we set out at the outset.

→Discuss on our forum

Ben is also Co-Director of the University of Kent’s Q-Step centre, and member of the editorial board of the Journal of Poverty and Social Justice

Lord Gus O’Donnell, Patron of the What Works Centre for Wellbeing

“This research demonstrates the importance of inequalities in explaining why people voted to leave. It provides strong supporting evidence for the views expressed by the Archbishop of Canterbury in the Lords this week. It is also an excellent example of how viewing the world through the wellbeing lens provides vital insights into what is really worrying people.

Personal wellbeing is measured by how satisfied people say they are with their life in the ONS statistics.

The causes of the referendum result are deep-rooted and complex. Economic inequality has been touted by many as the main cause, whilst others have focused on the alienation of the white working classes.

One factor which has not been discussed much is wellbeing. Might low wellbeing explain the decisions of many to turn over the apple cart and vote to leave the EU? Previous research at the LSE has shown, for example, that low average wellbeing predicts the likelihood that an incumbent government will be voted out in an election.

At the New Economics Foundation we looked at data from the Annual Population Survey, which asks over 160,000 people a year a set of four wellbeing questions, including a question asking how satisfied they are with their life, using a scale of 0 to 10. Looking at the voting pattern across the country, it turns out that places with lower average wellbeing did not have a different pattern of voting, but they did have lower turnout.

As part of our work for the What Works Centre, we are also exploring how to measure wellbeing inequality – how much variation in levels of wellbeing there is in a particular place.  Just as looking at average income can hide important disparities in the distribution, so too can looking at average wellbeing. We’ve used an indicator called ‘mean pair distance’ – if you take two random people in an area, what’s the average difference between them in terms of how satisfied they are with their life? Doing so, we found that high wellbeing inequality was a strong predictor of an area voting to leave.

We found that wellbeing inequality was associated with voting behaviour even when taking into account the percentage of residents with higher education (which has already been highlighted in the Guardian as the most important predictor of voting behaviour), and the percentage of the population that categorises itself as ‘White British’, thus controlling for ethnic diversity.

Higher local income inequality (measured using the 80:20 ratio) was not at all associated with voting to leave.

How can wellbeing inequality be reduced?  We’ll be exploring that question further as part of the What Works Centre for Wellbeing.  In previous research, looking at data across Europe, we found that levels of wellbeing inequality were predicted by levels of unemployment and the quality of governance, particularly voice and accountability.

→Discuss on our forum

Since 2011, the Office for National Statistics (ONS) has asked personal wellbeing questions to adults in the UK, to better understand how they feel about their lives.

Today they have released the fifth annual Personal Well-being dataset, as part of the Measuring National Well-being programme. Accompanying this is a report which presents headline results (local authority breakdowns will be published in early autumn 2016) for the year ending March 2016, together with how things have changed over the five years of collecting this information.

→Have your say: ONS would value feedback on how this information is shared:

Usually, we release our annual dataset in September. However, this year, for the first time, we have brought this forward to July. We have also given our reference tables a new look, and the statistical bulletin is written in a new style that is more concise than previous years. We are really interested to know what you think of this.

→Please get in touch and give us your feedback at qualityoflife@ons.gov.uk